A rewarding day in London

Lembit Öpik, Strategic Consultant for Political Engagement for the Association of Relocation Professionals, reflects on his first time at an ARP awards day.

After years of lockdown, I’ve got used to seeing everyone in the ARP in small boxes on my computer screen. So, it was something of a shock to meet people in real life; people whom I’ve come to know well - but from a great distance. In particular, I felt the discussion on our recent lobbying activities, held in a conference room prior to the lunch, marked a return to much more normal conversations and times for relocation.

At that pre-lunch seminar, chaired by Tad (Zurlinden) and supported by Simon (Johnston), I noticed two particular things. Firstly, relocation professionals spend a lot of time ‘working things out.’ Even though here was a roomful of people basically in competition with each other, there was an impressive degree of solution-sharing. After many years in politics, I can assure you that’s not how it felt in Parliament, or even inside political parties. It’s so different in the relocation community, where the sense of common purpose is unmissable.

The second thing I noticed is the maturity with which most practitioners can immediately identify things that could be done better by Government. For example, the fact the relocation tax threshold hasn’t changed for three decades might be something politicians and civil servants would spot as unsatisfactory. Everyone else can see that, but apparently this is an obscure secret in Whitehall…

I also heard folk discussing various differences between countries in terms of relocation regulations, and it was observed that Brexit is a bit of an incentive to make the UK more attractive than anywhere else for relocation. The lack of urgency in the corridors of power in terms of sorting this sort of thing out wasn’t the key focus of conversation, but I could see some frustration at the lack of proactivity by civil servants in tackling some basic elements of the situation, like, for instance, the somewhat byzantine visa system.

There was also a lot of talk about Seville and the upcoming convention there. It seemed to me many were regarding this London get together as a warm-up for The Big One. That added to the impression that those who attended this London event are fairly optimistic about the future. More than anything, they weren’t going to let current issues, a global pandemic or a possible recession get in the way of business.

At a personal level, it’s motivating to work within a sector that prefers to carry on swimming rather than sink beneath waves of despair. I also suspect that the Seville event will be a kind of awakening, at which delegates will collectively draw a line behind them, and define a rather more positive future. There’s a lot to feel good about, and as someone once said, things can only get better. 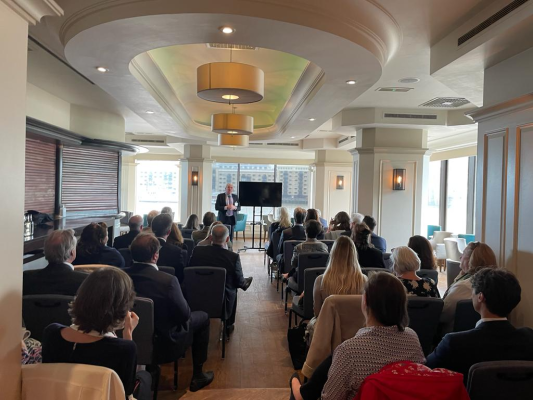